Again, this information is given by Chad Ward, a knife sharpening expert. This information will also be explained to you in person upon completion of your knives.

The ability of a knife to hold an edge is affected by several factors. Many are properties of the steel, others are job-specific.

Wear resistance – the ability to resist abrasion – comes primarily from the amount, type and distribution of carbides in the steel.

Strength is resistance to low-impulse deformation. In other words, bending. Strength is directly related to the hardness of the steel.

Toughness is resistance to high-impulse deformation – impacts, chipping and cracking.

As a general rule, strength and toughness are inversely related. A hard, unbendable steel can be brittle. It will not withstand chopping through bone as well as a tough, slightly softer steel. A tough steel might roll its edge if it encounters significant lateral stress or is forced through very hard materials – stresses that a strong steel would easily resist. The most extreme examples of both would be the extremely hard, yet shatter-prone ceramic knives from Kyocera compared to very tough, soft stainless Chinese cleavers.

Edge holding is a function of wear resistance, strength, toughness and the tasks the knife is used for. Toughness is required to resist chipping when you are cutting through materials where you might encounter bone or other hard bits and pieces. Strength is required to resist rolling and impaction if, for example, someone in your kitchen (despite repeated warnings) uses a glass cutting board. Wear resistance becomes important for edge holding when you’re cutting through abrasive materials.

So the way your knife holds an edge depends on the steel and what you use the knife for.

The most common culprits that put wear resistance, strength and toughness to the test are:

Wear. Duh. As a knife blade encounters abrasive materials, the edge wears away. Unless you cut only soft foods, your edge will always wear somewhat, though the most wear in the kitchen will come from sharpening your knives. Significant wear could take years.

Indenting and rolling. As pressure is put on the edge of the blade (and remember, the edge’s job is to concentrate tremendous amounts of pressure), the edge can indent, impact or roll over to one side or the other. The harder the steel, the less likely it will be to indent or roll. This is actually fairly common in the kitchen, which is why you need to steel frequently (more on this below).

Chipping. The edge can chip or crack under impact, especially when encountering hard materials like bone. Micro-chipping can be an important factor in edge degradation, although kitchen knives are fairly tough.

Corrosion. The wet, acidic environment of the kitchen can give knives a real beating. Micro-rusting and the attack of acidic foods can lead to edge loss at the very apex of the edge in short order.

Technique. As chef Thomas Haslinger points out, “Having sharpened my own knives and other chefs’ knives, I can say that an often overlooked factor in cutting edge performance is how each individual holds and uses his knives. A person that ‘feels’ the cut will always have a knife that outperforms an individual who just cuts and slams the edge into the cutting board”

Steeling regularly is the most critical maintenance you can perform on your knife. Whenever you use your knife, especially soft kitchen knives, the edge can turn out a bit. Turn the knife with the edge pointing to the ceiling under strong light. You shouldn’t be able to see it. The edge itself should be invisible. If, however, you see glints of light, those are spots where the edge has rolled. The edge is still reasonably sharp, it’s just not pointing straight down anymore. The steel realigns the edge of the knife, forcing the rolled spots back into line, making it usable again. 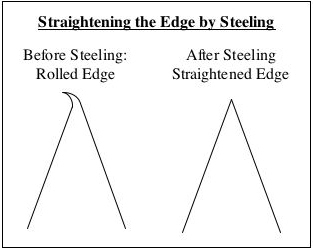 We will get into the various types of steels in just a moment, but be aware that the grooved steels that come with knife sets do in fact remove metal. A grooved steel acts as a file when used with a heavy hand, knocking microscopic chips out of your edge. At the very least, it is much coarser than the fine abrasive you used to achieve your edge. Steeling heavily with a grooved steel is taking several steps backward. A grooved steel should be used with caution and a very light touch.

The standard image we all have of steeling a knife involves a chef with his knife in one hand and steel in the other, blade flashing and ringing. If you’re particularly adept at this type of swordsmanship, have at it. It impresses the tourists.

A more effective method is to stand the steel straight up and down with the handle up and the tip resting on a folded towel to keep it from slipping. Why? Geometry.

Place the knife edge against the steel with the blade perpendicular to the steel – 90 degrees, right? Rotate your wrist so that you reduce the angle by half – 45 degrees. Reduce that by half – 22.5 degrees, and you are exactly where you need to be to steel your knife (if you have a 20 degree edge). You generally want to steel at a very slightly steeper angle than the edge bevel itself. 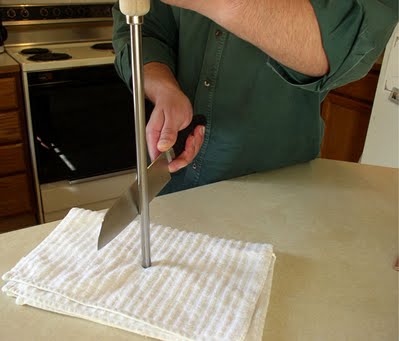 You can also use the Paper Airplane Trick to make a guide to prop against your steel so you know you are hitting the proper angle.

When you’re steeling, lock your wrist and stroke the knife from heel to tip by unhinging at the shoulder – it’s your pivot point – and slowly dropping your forearm. The key is to maintain a consistent angle all the way through the stroke. By locking your wrist and elbow, you will keep your angle stable from top to bottom. Go slowly and follow all the way through the tip. You don’t have to press very hard to realign the edge. Steeling requires barely more pressure than the weight of the knife itself.

Alternate from side to side, keeping the same alignment and angle on both sides. It really only takes four or five strokes per side to get your knife ready for more work.

When should you steel? Every time you use your knife. Oddly enough, steeling before you use the knife is much more effective than steeling afterward. A steeled edge can be very sharp, but it is not as durable as a freshly honed edge. If you don’t use a steeled edge right away it can actually relax back into its blunted state. The same is true of a blunted edge. If you really degrade the edge of your knife in a heavy cutting session, let it sit overnight before sharpening. It will be in much better shape than it was the day before.

You should also steel before sharpening so any rolled or impacted edges are pushed back into alignment. That way you don’t cut off the rolled edge and lose more metal than you really need to. You also can steel after sharpening to add a final bit of polish (especially on a medium to medium fine edge) and tooth alignment. A steel actually “smears” the edge, teasing out a little more thinness. You’ll have a keener edge, but it will be weaker than the freshly sharpened edge.

Everyone should at least know some basics on maintaining their knives… whether its their kitchen knives or hunting knives, the rules are the same. The first point is HUGE, don’t miss it. If you are cutting on a class cutting board or plate, this will destroy your edge… do yourself a favor and go buy a wooden, bamboo, or plastic cutting board and a good steel.

“- Use wooden or composite plastic cutting boards only. Glass, ceramic, marble and steel will cause the edge to roll or chip. Bad. Don’t do it.

- Don’t drop your knives in the sink. Not only is it a hazard to the person washing dishes, but you can also blunt the tip or edge.

- Don’t put your knives in the dishwasher. The heat may damage wooden handles and the edges may bang against other cutlery or plates.

- Keep your knives clean and dry. Sanitize if necessary.

- Do not store your knives loose in a drawer. Use a block, magnetic strip, slotted hanger or edge guards. The magnetic strip is not recommended if you have children or inquisitive pets.

- Finally, your knife is not a can opener, a screwdriver, a pry bar, box cutter or hammer.”

Send this link to google